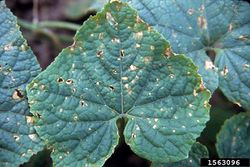 The fungus is wide-spread, particularly in warmer regions, and has many host plants. Usually it causes necrotic lesions on leaves and fruits. For example, soybeans, tomatoes (target spot disease) and rubber (leaf drop) may be severely affected . Heavy infections can result in premature leaf drop and wilting.

Conidia are formed singly or in chains and are long, brown in colour, cylindrical to club-shaped and with 3-15 pseudosepta. They measure approximately 50-150 x 10-15 µm and infect leaves through small wounds. Conidiophores are produced a few days later under suitable conditions.