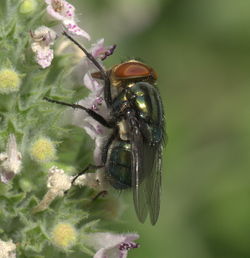 This fly is found in the Americas and feeds primarily on carrion. It can also cause myiases in animals and humans as a secondary agent (secondary myiasis). This means, the flies lay their eggs in existing wounds or infection sites and the larvae feed mainly on the dead tissue, unlike the true screwworm, Cochliomyia hominivorax. Still, the secondary screwworm can be of economic importance to livestock. It has been also recorded as a carrier of the human warble fly, Dermatobia hominis, a species that lays its eggs on insects likely to visit a suitable host.

The adults are similar to those of C. hominivorax, metallic green and 5-8 mm long. There are 3 characteristic dark, longitudinal stripes along the notum. Larvae can reach a length of 17 mm. When mature they leave the host and pupate under leaves or in the top layer of the soil.