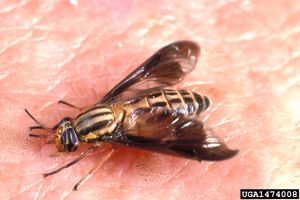 The genus Chrysops is widely distributed and contains several hundred species of blood-feeding flies. A number of them are important pests and disease vectors like Chrysops vittatus in North America. The diseases transmitted include tularemia and loa loa filariasis.

The female flies feed on humans, other mammals and sometimes also on other vertebrates. The males and often also the females feed on nectar and ripe fruits. The flies breed in wet soil, marshes or water and the larvae feed on organic matter.

The adults have a size of 8-10 mm and are yellowish, brown or black, often with characteristic patterns on the wings and the body. The genus is characterized by apical spurs on the hind tibiae and long antennae with 4 terminals segments.

For a taxonomic review of the genus see Morita et al., 2016.