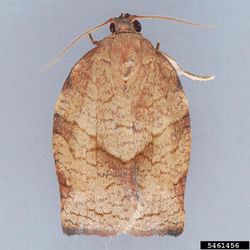 This genus of tortricids contains around 50 species, including several important forest pests. Economically the most important species are the spruce budworm and the western spruce budworm. Many species attack conifers. The larvae feed on the shoots, buds and needles and form dense webbing. Some infestations can lead to complete defoliation and death of the host tree.

The genus can be recognized by the relatively large forewings with a broad apical part and characteristic markings and venation.