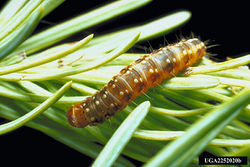 This moth is a serious native defoliator of spruce and fir in the north-eastern parts of North America. The larvae attack the shoots, buds and needles, especially in the upper part of the crown. The damaged needles turn brown and are covered by dense webbing. Often infestations extend over several years and lead to complete defoliation and death of the trees.

Outbreaks have been known to occur periodically since 1807, with an outbreak lasting between 10 and 20 years. The last outbreak occurred from 1976-1991 and covered > 50 million hectares in eastern Canada and the U.S. In Quebec, Canada alone, estimated losses amounted to around 500 million m3 of timber. Natural enemies like parasitoids and insect diseases, as well as environmental factors are believed to be the main regulators of these outbreaks.

Adults have a wingspan of about 2 cm and are greyish with dark-brown markings. The larvae are brown with lighter spots. Usually there is one generation per year (occasionally one every 2 years). The young larvae overwinter and have completed their development by mid summer, going through 6 larval stages. Dispersal mainly occurs by the newly hatched larvae through the air with the help of silken threads. Control involves the aerial application of Bacillus thuringiensis var. kurstaki preparations, pesticides or specific viruses.