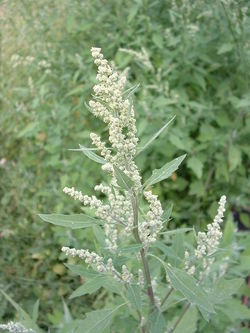 This species is a frequent, fast-growing and economically important annual weed in temperate regions. It competes with crops like cereals, legumes or root crops, causing substantial economic losses and control costs. Further, it is a host to a large variety of plant viruses. It is found in many environments, but prefers well-drained soils with high levels of nitrogen. It is also grown in some countries as a grain or vegetable crop.

The seeds germinate early in the growing season and the plant grows to a height of more than 1 m. The leaves are broadly triangular to elongated with irregular, shallow-toothed margins. The flowers are arranged in clusters. They are small, green and appear white due to the presence of tiny, bubble like hairs.

The seeds are shiny, mostly black and about 1-1½ mm in diameter. They are dispersed by animals or strong wind and may survive up to 20 years in the soil. Apart from herbicides, cultural methods like rotary hoeing, late seeding and the use of cover crops are used.

For details see the respective pages in the BugwoodWiki and in Wikipedia.