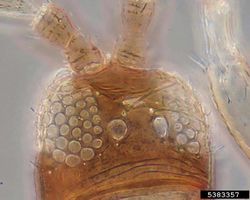 This thrips is a pest of tomatoes in eastern Africa and suspected to be a vector of the Tomato spotted wilt virus (Macharia et al. 2015). It has been also reported from other parts of Africa as well as from other regions like Central America and South-East Asia, based on surveys during 2007 and later as well as on museum specimens.