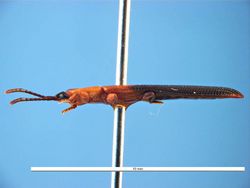 The beetles and larvae live between the still folded leaflets of developing palm fronds where they feed by scraping the leaf surface. The leaf surface of the unfolding fronds then shows necrotic streaks and dries up. The adults are around 10 mm long and very flat, black or brown with some parts reddish, orange or yellowish.

Several species have caused serious outbreaks on coconut palms in Asia and the Pacific, usually when a species was accidentally introduced into a new country or area. The introductions of parasitoids has been successful in a number of cases and these were some of the earliest examples of effective biological control in south-eastern Asia and the Pacific.