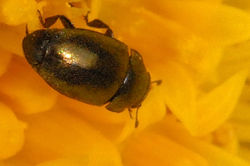 Pollen beetles are serious pests of oilseed rape in Europe, predominantly Brassicogethes aeneus, but other species may also be involved. The beetles breed and feed on the buds, flowers and developing pods. In Germany, 30,000 ha of oilseed rape was destroyed and 200,000 ha damaged in 2006.

The genus contains around 40 species which are found in Europe and temperate parts of Asia. The adults are shiny black, sometimes with a bluish or greenish metallic tinge, and around 1½-3 mm long. Most species have been previously classified under the genus Meligethes.