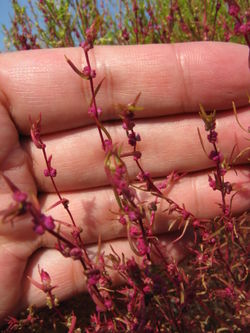 This species is often called Kochia scoparia, especially in publications on weeds. It is native to Europe and temperate regions of Asia and has become an important introduced weed in North America, e.g. in pastures and cereals. Other crops are also affected. A study with sunflowers showed yield reductions of more than 50% (Lewis and Gulden, 2014). The species has been also introduced as an ornamental into other regions. For example, into Australia from where it has been erraticated in the 1990s.

Typically, one plant produces more than 10,000 seeds. These are dispersed by wind, water or agricultural equipment. They remain viable for 1-2 years. In autumn, the whole plant can be also blown by the wind as a tumbleweed. It is drought resistant. Control of the seedlings through early tillage or by herbicides is recommended in spring.

The plant grows to a height of 1-2 m and has a taproot which can grow around 2 m deep. The stem has many green to reddish branches with lance-shaped leaves, 2-5 cm long. The flowers are very small, about 2-3 mm large and green to whitish. The fruits are winged and contain one small (1-1½ mm) oval seed.