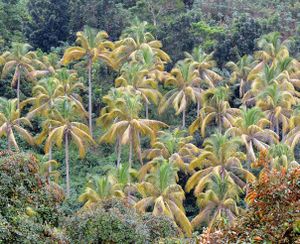 This scale insect is found in south-eastern Asia. It is closely related to the true coconut scale, Aspidiotus destructor and was originally described as Aspidiotus destructor rigidus. The host plants of A. rigidus are mainly coconut and other palms, like for A. destructor. Both species can cause serious outbreaks in coconut plantations. For example, A. rigidus outbreaks have been reported from northern Sulawesi, Indonesia during 1925-1928 and from the Philippines since 2009.

In the Philippines A. rigidus is called "cocolisap" and has caused devastating outbreaks in the coconut plantations of southern Luzon (the Calabarzon area) and on the island of Basilan, off the south-western part of the island of Mindanao. More than 2 million coconut palms were affected with severe yellowing of the leaves and significant loss in nut production.

Differences between A. rigidus and A. destructor

The main differences between both species have been described by Reyne (1948) and Watson et al. (2015). They include: