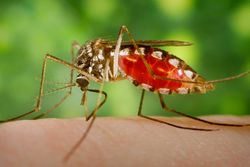 This genus contains around 50 species of mosquitoes which are found in warmer parts of Asia, as well as in Australia and the Pacific. They breed in small accumulations of water that contain organic matter like tree holes, leaf axils of some plants or water-filled holes in rocks. Several bite humans and some (e.g. Armigeres subalbatus) transmit viruses and other human pathogens.

The genus is part of the Aedini (genera similar to Aedes) and most closely related to Eretmapodites (Wilkerson et al., 2015). Compared to the related genera, the species of Armigeres are slightly larger and can be recognized by the combination of a number of morphological characters. For example, the proboscis is laterally flattened and slightly curved downwards.