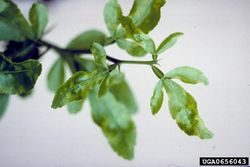 The virus is widely distributed in apple trees and is associated with tree decline and graft union necrosis. "Citrus tatter leaf virus" (CTLV) is considered a strain of ASGV and is common on citrus in Asia. This strain has been also reported from Australia and Africa and was actually first reported from lemon trees in California that were introduced from China.

The virus has flexuous filamentous particles, 600-700 nm long with a single-stranded RNA genome of approximately 6500 nucleotides. The genome has two overlapping open reading frames encoding proteins of 241 and 36 kDa, respectively.