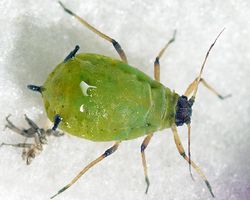 The aphid is a polyphagous pest with a world-wide distribution. It can cause serious infestations on citrus where it attacks the young leaves and buds, resulting in curled or distorted leaves and stunted shoots. Flowers and fruits may not develop properly or may drop. Hermoso de Mendoza (2006) studied the relationship between infestation levels and yield losses. For example, an annual maximum number of 2000 aphids per square meter of clementine tree canopy resulted in 20% yield losses. In addition, A. spiraecola is a vector of the Citrus tristeza virus and other viruses. It is also an important pest of apple and ornamentals and attacks many other crops like crucifers, potatoes or pepper.

In most regions the aphid propagates parthenogenetically throughout the year and overwinters as adult females. However, in North America winged males and females develop in autumn and lay overwintering eggs on Spiraea. The development from egg to adult lasts only 1-2 weeks and there may be up to 40 generations per year in southern Europe. Like for other aphids, the presence of natural enemies needs to be considered before any control action is taken. A critical time is in spring when young shoots become infested. A threshold of 10% infested shoots has been suggested.