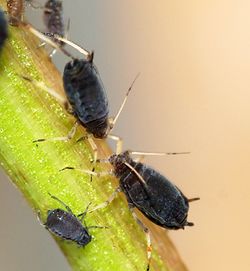 During the summer, wingless females are common which reproduce parthenogenetically, giving birth to live nymphs. Winged forms are produced intermittently which disperse, often over large distances by air currents. In temperate regions, sexual reproduction usually occurs in autumn when the females lay eggs which overwinter. In warmer regions, the females might reproduce parthenogenetically all year round with males being rare or even missing. Some species alternate seasonally between two host plants and the overwintering generation might develop on a non crop host.

Wingless females are typically around 1-3 mm long. The development of one generation is often as short as 2 weeks which leads to population explosions if there are suitable conditions and a lack of natural enemies.