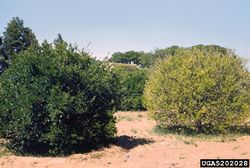 The virus causes a serious disease of citrus which is widespread in tropical and subtropical regions. Asia is considered a possible origin. Infections have resulted in the loss of millions of citrus trees with epidemics in South Africa around 1910, South America in the 1930s, California around 1940, Florida around 1950, Spain around 1960 and Israel around 1970. The virus apparently spread through infected budwood and subsequently by aphids.

Several virus strains have been described with substantial differences in their virulence. The symptoms vary depending on the virus strain, host susceptibility and environmental factors. The two main diseases are 1) a quick decline and death of trees and 2) stem pitting. The decline can be rapid (death within days after the appearance of symptoms for trees grafted on sour orange, Citrus aurantium, rootstock) or slow over a period of several years. Stem pitting might produce deep cavities in the trunk under the bark, but can also have other causes. The virus may also cause seedling yellows (chlorosis and dwarfing) as well as asymptotic infections. Mexican lime (Citrus aurantifolia) can be used as an indicator plant in grafting assays.

The virus is transmitted in a semi-persistent manner by several aphid species like Aphis gossypii or Toxoptera citricida. The aphids loose their ability to transmit the virus after about a day. Long-distance spread is through infected planting material. The main management approach is grafting on a tolerant rootstock and using virus-free budwood. Alternative methods involve cross-protection with a mixture of different mild isolates.

The particles are filamentous and thread-like, about 2000 nm long and 12 nm wide, with a bipolar morphology. The genome consists of single stranded positive-sensed RNA with a size of about 19 kb. It contains 12 open reading frames.