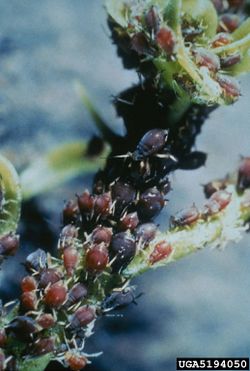 This aphid is believed to be native to tropical parts of south-eastern Asia, but was introduced into most other citrus-growing countries. For example, it arrived in Argentina and Brazil in the 1920s, was first recorded in Venezuela in 1976 and has spread since then through Central America and the Carribean (1980s). It is reported from the southern U.S.A. since 1995 (Michaud, 1998). It feeds on the young shoots of citrus trees. Apart from feeding damage, it can efficiently transmit the Citrus tristeza virus (CTV), as well as other viruses like the Cucumber mosaic virus.

In most regions, A. citricidus does not have a sexual cycle and reproduces only through parthenogenesis, giving birth to live offspring. The development from birth to mature female is typically around 2 weeks and there may be up to 30 generations per year. After going through several generations of wingless forms (aptera), winged adults (alates) are produced, often because of overcrowding. The alates disperse and can fly long distances, assisted by wind. Winged adults might carry CTV and spread the virus disease during migration. Usually there are 2-3 population peaks per year in subtropical regions, linked to rain events that induce a citrus flush.