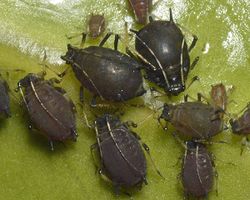 This aphid is polyphagous and widely distributed around the world. It is common in tropical and subtropical regions, and can be also found in greenhouses in temperate countries. A. aurantii has been originally described from southern France on citrus, and was initially recorded mainly in southern Europe. It is a serious pest of citrus and tea, but also infests other woody plant, including crops like coffee, cacao or mangoes. On citrus, it attacks the buds and young shoots, causing shedding of the buds and leaf deformations. It has been further reported to be a virus vector.

The biology of A. aurantii is similar to that of the brown citrus aphid, Aphis citricidus. It reproduces almost always through parthenogenesis, with females giving birth to live nymphs. Sexual reproduction appears to be rare. Development from birth to mature female may be as short as one week and there may be 10-15 or up to 30 generations per year. Colonies may be attend/protected by ants.

All stages of A. aurantii are black or dark reddish brown. Mature wingless females are around 2 mm long, with an oval body. The antennae and legs are paler, but have black bands and sections.