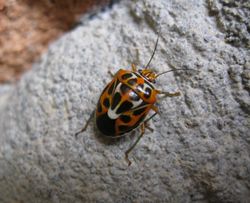 This genus of stink bugs includes around one dozen species which are mainly found in tropical and subtropical parts of Africa, Asia and Australia. The species a typically colourful. Several of them are regarded as pests of coffee in Africa, feeding on the developing berries, shoots, twigs and leaves. The feeding activities give the beans an unusual taste described as 'potato taste'. For example, Antestiopsis thunbergii is a coffee pest in eastern Africa.