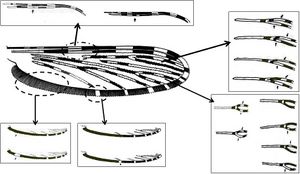 This mosquito is found in forested areas of western and central Africa, where it breeds in slow moving rivers and streams, often with turbid water and aquatic vegetation at the edges. It is an important malaria vector in these areas with infective bites reaching up to 300 per human per year. A. moucheti is highly anthropophilic and frequently bites indoors. Apart from humans, it also feeds on ungulates and other mammals.