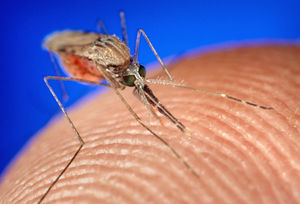 In a wider sense, Anopheles gambiae s.l. is a species complex which contains important malaria vectors in Africa like Anopheles arabiensis. Members of this complex are morphologically indistinguishable and need to be separated by PCR analysis. Anopheles gambiae sensu stricto is one of the main vectors of human malaria in Africa and is divided again into 2 molecular forms (M and S forms). The M form has been described as a separate species, Anopheles coluzzii Coetzee and Wilkerson, 2013. It is common and found throughout sub-Saharan Africa in close association with humans, its main host (e.g. see Fritz et al. 2013). Populations can increase rapidly after rains create breeding sites. Various man-made and natural water accumulations are used, even polluted water. 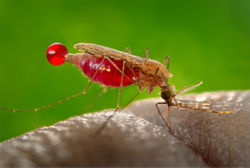 The eggs and 4 larval stages develop in 2 weeks or less and the adult stage lasts again about 2 weeks. Population cycles and malaria transmission rates follow the rainy seasons. In the dry seasons the M form undergoes a summer dormancy (aestivation) in nearby shelters, while the S form migrates over longer distances with the aid of wind (Lehmann et al. 2014).

The adult is light brown, with a forewing length of 3-4 mm. It is active during the night, typically with the peak of bites occurring between 3 and 6 a.m. For control, insecticide treated bednets and indoor spraying is recommended.