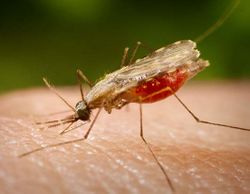 The mosquito is common in South and Central America, where it is often the most important malaria vector. It is highly anthropophilic, biting early in the morning as well as during dusk, mostly outdoors but also indoors. A. darlingi can transmit both Plasmodium falciparum and P. vivax, and Plasmodium infection rates of up to 8% have been reported (Vezenegho et al. 2016).

While humans are often the most common source of blood meals, domestic animals, other mammals, fowl and other birds can be also frequent hosts (e.g. see Zimmerman et al., 2006). A. darlingi is associated with slow flowing rivers, lakes and other natural accumulations of fresh water. Populations increase during the rainy season.