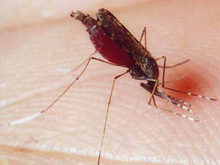 The mosquito is a vector of malaria in coastal areas of northern South America. For example, it was linked to a malaria outbreak in Trinidad in 1991-92. Its distribution extends from Brazil to Panama in the east and from Panama to Ecuador in the west. It readily bites humans (mainly during dusk and nighttime) and is commonly collected inside houses.

The larvae live mainly in brackish water like mangrove swamps and coastal ground pools. However, it may also breed in fresh water several kilometres away from the coast where it is found in ponds, swamps and irrigation canals.