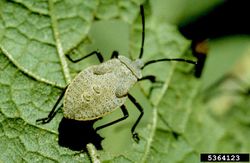 The bug is native to North and Central America and feeds on plants of the family Cucurbitaceae like fruiting squash, pumpkin or watermelon.

The adults are usually about 15 mm long and grayish brown. The 5 nymphal stages are often gregarious and initially green with red legs, head and thorax. They subsequently turn darker green with black legs. The life cycle last around 6-8 weeks and the adults overwinter in the soil.