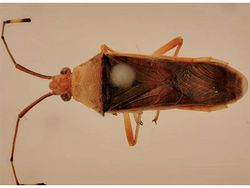 This plant-sucking bug is a native, polyphagous pest of fruit and nut crops in north-eastern coastal areas of Australia. Nymphs and adults feed on shoots and developing fruits, causing significant losses. Important crops attacked include avocado, macadamia, cashew and papaya. The piercing of the bugs results in deformations and lesions on the fruits, making them unmarketable. A subspecies is also found in Papua New Guinea, attacking rubber trees, cassava, coconut and cacao, among others.

The adult is about 15 mm long, light green with brownish antennae and dark brown forewings. The nymphs have 2 conspicuous black spots on the abdomen, bordered by white. The development from egg, over 5 nymphal stages, to the mature adult lasts about 5-7 weeks.