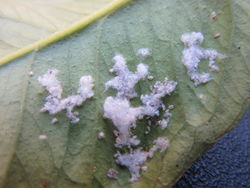 This genus contains around 20 species of whiteflies, including several plant pests. Most species are found in the Americas (Lucid Key Server), but the pest species listed below have a wider distribution. Aleurothrixus floccosus is found in many citrus growing regions, infesting citrus and some other fruit trees. The genus can be recognized by the structure of the puparium.