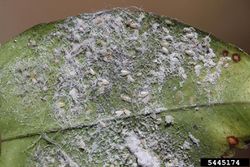 This whitefly is widely distributed and infests citrus trees and some other crops. It is believed to have originated in Asia and spread to various other regions. For example, it was first recorded from Spain in 1966 and subsequently spread across the Mediterranean region. The honeydew produced by the insects results in the formation of sooty moulds.

Introductions of the parasitoid Cales noacki has usually given good results. Predaceous ladybird beetles can also contribute to natural control. The adults are around 1½ mm long and the nymphs are covered by long wax filaments. Under Mediterranean conditions there are around 5 generations per year.