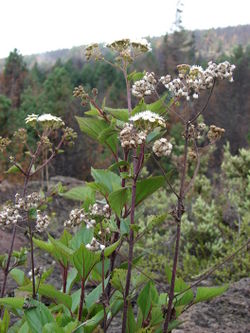 The weed is of Central American origin and has invaded several tropical and subtropical regions around the world, e.g. southern China (first record 1935), where it competes with native species. It can become very abundant in forest areas and can replace most of the under-story plants.

A. adenophora adapted to a variety of habitats like cool moist areas on the slopes of hills or mountains. Invasion is facilitated by a high reproductive rate and strong allelopathic effects.