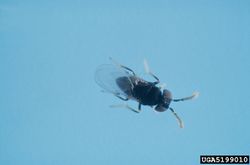 This is an important parasitoid of the citrus leafminer (Phyllocnistis citrella), which originates from Thailand and was released in North America (1994), Israel (1996), Italy (1997), Brazil (1998) and other countries. It has readily established in these countries and parasitation rates of around 30% have been observed.