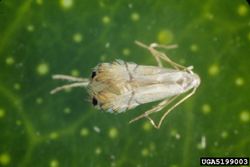 The leafminer is an important pest of citrus in Europe, Asia, Near East, Africa, and Australia. It has been recorded in North America since 1993 and has quickly invaded many countries in Central and South America, e.g. reaching southern Brazil around 1996.

The larvae mine the young leaves, usually on the lower side, leaving a well-marked central frass line. The damage can cause slower development of the trees. Some yield losses have been also reported. Management involves the application of mineral oil. Management in the Americas have been mainly directed at introducing parasitoids. Insecticides may kill the natural enemies of the leafminer.

The moth is about 2½ mm long (wingspan about 4 mm) with feathery hindwings. The life cycle from egg, through 4 larval stages, to mature adult takes about 3-6 weeks. There may be up to 10 generations per year.