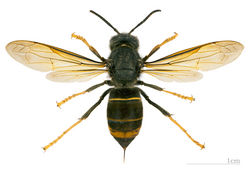 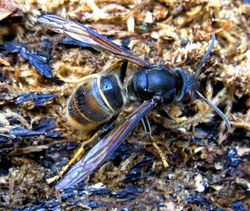 This species of hornet is native to parts of Asia. The supspecies Vespa velutina nigrithorax has been introduced into several countries. It has been recorded from France since 2004, from Japan since 2012 and has spread from France to several neighbouring countries in Europe. It is an agressive and stinging species. In addition, it preys on honey bees.

Workers are around 20 mm long, males 24 mm and queens up to 30 mm. They have a black and yellow colour pattern (brown and brownish yellow in the European hornet, Vespa crabro, which is also larger).