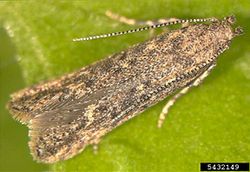 The larvae mine the young leaves (also the stems and fruits) of tomatoes and can cause substantial damage which can result in total crop losses. The mines are typically broad (unlike mines of Liriomyza) and may have an oak-leaf shape. Some other crops can be also attacked.

The life-cycle from egg, through 4 instars, to mature adult is completed in about 1 month. Pupation takes place in the soil. There are up to 12 generations per year.

The moth is about 6 mm long with a wingspan of around 10 mm. It is brownish in color. The antennae have alternate light and dark brown bands. The forewings are speckled with many lighter and darker patches and spots. The hindwings are silvery with fringes of long hairs.