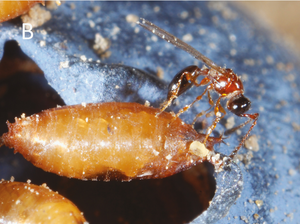 This wasp is widely distributed in Europe, Asia and North America. It is a solitary pupal parasitoid of Drosophilidae species. Since the invasion of the spotted wing drosophila (Drosophila suzukii) into various regions around the world, T. drosophilae has been studied as a native parasitoid which can be easily mass-reared and released. Such augmentative biological control can substantially increase parasitization rates and suppress D. suzukii populations (Stacconi et al., 2019). T. drosophilae is commercially available in some countries.