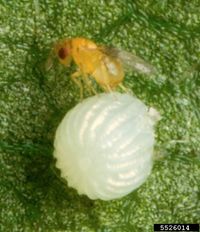 This wasp is native to eastern Asia where it is an important egg parasitoid of the Asian corn borer, Ostrinia furnacalis. It has been also introduced into other regions. The host range includes many other species of Lepidopterous insects, but it is predominantly used against Ostrinia species. In China, several million hectares of maize are treated yearly with T. ostriniae and other Trichogramma species (Wang et al., 2014). Various experimental releases have been also made against the European corn borer, Ostrinia nubilalis in North America, e.g. see Wang et al. (1999).