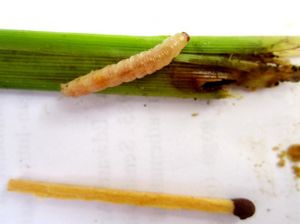 The moth is a pest of maize in eastern Asia and Australia. The larvae bore into the stalks and also feed on the leaves and developing ears. Yield losses in China have been estimated at 6-9 million tons. Other crops may also be attacked. Apart from the use of insecticides (usually applied against the young larvae), the augmentative release of egg parasitoids has been practised.

The total development time from egg, through 5-6 instars, to adult is 1-2 months. There are usually 2 generations per year. The adult is 10-15 mm long, yellow-brown with darker lines. The species is closely related to the European corn borer (group III of the genus Ostrinia).