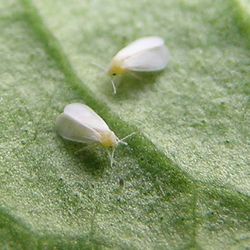 The whitefly is a important and polyphagous pest, attacking vegetables, ornamentals and other crops, with a worldwide distribution. In Europe, it was first recorded in 1856 and was believed to have spread through infested plants from Mexico. It can cause considerable damage in greenhouses, reaching densities of more than 1000 insect per leaf. Infestations result in sooty moulds, stunting, wilting, yield losses and in some cases plant death.

It also transmits plant viruses like Tomato infectious chlorosis virus or Tomato chlorosis virus but is not as efficient and important a vector as Bemisia tabaci. The development from egg, through 4 nymphal stages, to adult lasts around 3-4 weeks under favorable conditions. There is no resting stage and it requires green plants to survive.

In the greenhouse environment, biological control through the regular release of parasitoids like Encarsia formosa has been practised on a commercial scale since the 1970s. On some crops, seasonal inoculative releases are sufficient to keep the whitefly under control.

The adult is about 1½ mm long and similar in appearance to Bemisia tabaci. However, it is larger and holds the wings at a flat angle to the substrate (nearly perpendicular in B. tabaci), giving it a triangular shape from above.