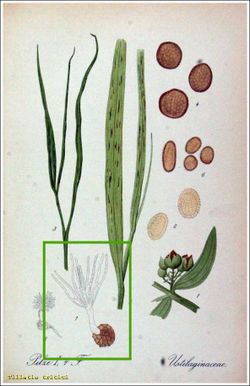 This smut fungus is widespread in Europe and some parts of North America and causes an important bunt disease of wheat. As part of the infection process, the wheat forms bunt balls instead of grains with an unpleasant smell. Yield is reduced and the grain is downgraded and devalued. Other Tilletia species like Tilletia laevis can occur together with T. caries and cause similar symptoms. The disease is mainly managed through fungicide seed treatments and the use of resistant cultivars.