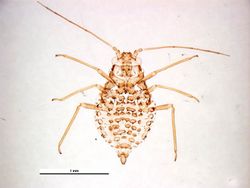 The aphid is native in Europe and the Mediterranean region and has spread to other regions like North America (1950's) and Australia (1977), as well as to South Africa, Japan and New Zealand (all around 1980). In the invaded countries, it has become a serious pest of alfalfa, causing extensive damage. In Australia, control was achieved through resistant varieties and the introduction of a parasitic wasp from Iran. However, new outbreaks were recorded there since 1989 by a genetically distinct biotype, known as the spotted clover aphid.

The aphid is about 1½ mm long and yellowish–green, with four to six rows of dark spots running along the length of its back. It causes veinal chlorosis and sooty mold due to honeydue excretion. It can transmit viruses like the Alfalfa mosaic virus or Cucumber mosaic virus.