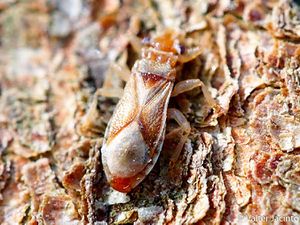 The bug is native to Australia, but has not been noticed there until an outbreak around Sydney in 2002. It has since invaded various regions outside Australia and has been recorded from Africa since 2003, from South America since 2005 and from Italy since 2011.

It feeds on the leaves of Eucalyptus and Corymbia trees, causing bronzing, reddening or yellowing. Subsequent defoliation can lead to dieback and tree mortality. The adults are 2-3½ mm long and light to dark brown. The life cycle from egg, over 5 nymphal stages, to mature adults lasts about 5 weeks.