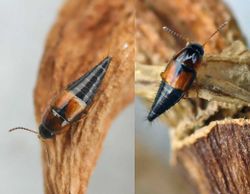 This species of rove beetle is regarded as a common predator of cereal aphids in Europe and surrounding regions. While it readily feeds on aphids, some authors have expressed doubts that aphids are the preferred food. For example, Dennis et al. (1991) concluded that T. hypnorum feeds mainly on fungi like powdery mildews. The adults are 3-4 mm long, black with dark red elytra. The pronotum is yellowish brown on the sides.