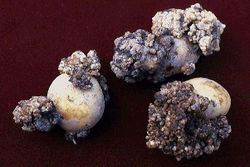 This chytrid causes an important potato disease in Europe and North America and is also found in other continents. It originated from South America and was first reported from the U.K. in 1876 and from Germany in 1941. Yield losses can exceed 50%. Infections are easy to recognize by the irregular, cauliflower-like growths on the tubers. The fungus can also infect sprouts, stolons, stems, leaves, and even flowers. Other species, e.g. from the genus Solanum may also become infected. The disease is soil-borne and persists as thick-walled winter sporangia for many years.

Infections start through zoospores released by sporangia. Young epidermal cells of the developing tubers become infected. The cells swell, multiply and develop 2 types of sporangia. Summer sporangia which germinate after a short period of time and release new zoospores. The 2nd type are durable winter sporangia which persist in the soil for many years and can easily spread through farm equipment, animals or water. They are around 50 µm in diameter and contain 200-300 zoospores. The winter sporangia represent the sexual reproduction cycle (see illustration below). They germinate in spring and release motile zoospores which are about ½ µm large.

In many countries management is based on strict phytosanitary measures and regulations to prevent the spread of the disease. It is obligatory to report infections. All plants in the infected field are then destroyed, farm equipment disinfected, and potato cultivation is stopped. Only resistant cultivars are planted in the neighbouring fields. Such measures and the development of resistant cultivars have been able to contain the disease. However, it has in recent years again become important due to the appearance of new resistance-breaking pathotypes.