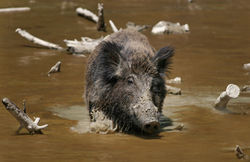 The wild boar has been introduced for hunting into several countries and has become invasive in parts of Australia as well as in North and South America. It is still expanding its range and interbreeds with domesticated pigs which escape and become feral (Sus scrofa domesticus).

Boars attack crops near forests, especially root crops or cause damage to forest trees. They eat almost anything, any type of crop, grass, insects and even reptiles or mammals (e.g. lambs). Wild boars often reach pest status because of their damage to agriculture and as a nuisance in residential areas, where they, for example, open garbage containers.

In addition, they can cause vehicle collisions (Beasley et al., 2014), including human casualties and are involved in spreading diseases of livestock and humans, e.g. they are a reservoir of bovine tuberculosis in some areas. Even in their native range of Europe and Asia they are often regarded as pests.

Culling by hunting often does not remove enough animals to prevent population increases. In Europe, populations of wild boars have increased since the 1990s while recreational hunting has stagnated or declined (Massei et al., 2015). The increase could be also related to mild winters, reforestation and intensification of crop production. Apart from hunting, poisoning and trapping methods are used to control populations. Wild boars can produce 2 litters with 4-10 piglets each per year.