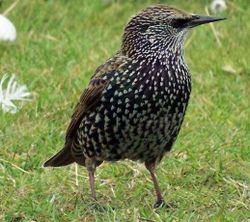 The European starling has a native resident distribution extending from central and western Europe to parts of western Asia. It migrates further north in the summer and south in the winter. Sturnus vulgaris has been deliberately introduced in the 19th century into other regions and has become invasive in several countries like the U.S. (introduced in 1890/91), Australia and South Africa. In North America, it also migrates north in the summer.

S. vulgaris is a social species and can form large swarms. The natural habitat is grassland, where it feeds on insects, earth worms or grass seeds. It some areas it has become a serious pest of livestock feeds in cattle farms. Apart from significant losses to feeds, starlings can contaminate the feeds through their droppings and transmit diseases like Salmonella spp. (Elser et al., 2019).