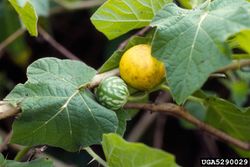 The weed is native to South America (southern Brazil, northern Argentina and Paraguay). It has invaded various tropical and subtropical regions around the world, including the southeastern U.S. in the 1980s. It can spread easily through its seeds. The annual damage to rangelands in Florida, in terms of production losses, has been estimated at more than 10 million US$. The weed competes with pasture grasses and forms dense monocultures. In addition, it invades wooded areas and has become an ecological problem.

The petioles and leaves have long spines. The immature fruits are pale green with dark green veins and resemble small watermelons. The ripe fruits are yellow. A plant produces about 150 fruits per year, each containing about 400 seeds. The seeds are dormant for several months and have to dry before they germinate. Cattle and wildlife eat the fruits, spreading the seeds, but not the leaves.

The leaf-feeding beetle Gratiana boliviana has been introduced from South America and released in Florida between 2003 and 2011, resulting in satisfactory biological control of the weed (see Diaz et al., 2014).