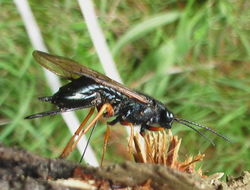 In its native Europe, S. noctilio attacks live but preferably weakened pine trees (Pinus) as well as felled stems. However, in some introduced areas populations have reached epidemic levels, resulting in tree mortality of 60-80% in some stands. The wasp has killed millions of pine trees in several countries. Populations are still expanding in some areas with an average rate of spread of 20-80 km per year.

The symbiotic, plant pathogenic fungus is inserted into the wood during oviposition and serves as food for the larvae of the wasp. The mature female larvae excrete a liquid containing fungal spores which the young female uses to acquire the fungus again after pupation and before leaving the trunk.

Biological control has been the main approach in areas where the wasp has been introduced. This has involved the release of parasitoids and the parasitic nematode Deladenus siricidicola (= Beddingia siricidicola).

The development of eggs and larvae depend on the temperature. The eggs are typically laid during late summer or autumn and can overwinter in cool climates. There are 7 larval stages (range 6-12) and one generation per year, 2 in cooler climates. The females are 20-30 mm long and coloured dark blue with uniformly black antennae and orange legs. Males are black and slightly smaller with orange middle segments on the abdomen.

For a reviews see Slippers et al., 2015 and the respective page in Wikipedia.