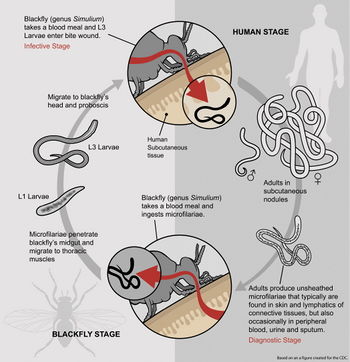 S. damnosum is a species complex. Several members are important vectors of Onchocerca filariasis or river blindness (caused by Onchocerca volvulus) in western and southern Africa and the larval stages need to be controlled regularly. The larvae live in fast running, oxygen rich rivers and streams. Current research is directed at attempts to eradicate the disease in high-risk areas. This might be possible because suitable environments for the vector are often geographically isolated.

The Simulium damnosum s.l. species complex consist of around 60 sibling species and cytoforms. Some of these are also important vectors of onchocerciasis (for example Simulium sirbanum or Simulium squamosum) and several feed more specifically on humans in contrast to Simulium damnosum s.s. The complex includes: