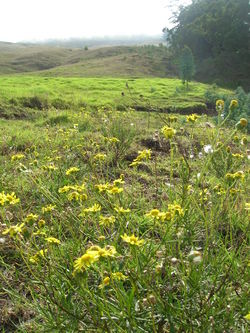 The weed is native to southern Africa and has spread to other regions like Australia (around 1918), South America (around 1940) and Hawaii (around 1980). It can cause severe infestations in grasslands and is poisonous to livestock. It has been estimated that around 45,000 farm animals are lost yearly in southern Brazil due to the weed.