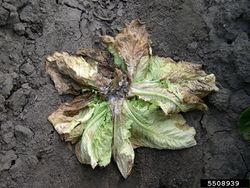 The fungus has a worldwide distribution in temperate and sub-tropical regions and is common under moist conditions. The fungus causes blight, white mold, and soft rots on many crops, for example lettuce (lettuce drop), groundnuts (Sclerotinia blight), beans and cabbage. Yield losses on groundnuts may reach 80%.

The fungus survives in the soil for many years in form of sclerotia. Crops become infected upon germination of the sclerotia. Especially plants injured by farming tools are susceptible. White mycelium develops at the site of infection and the fungus invades the different parts of the plant. Leaves become chlorotic and necrotic and the plant eventually dies. Large numbers of sclerotia are formed on the dead plant which persist in the plant debris and the soil and might reach a density of 50 sclerotia per 100 g of soil.

Management options include planting resistant or tolerant cultivars, the use of fungicides, e.g. in form of seed treatments or crop rotation. Biological control agents like the commercially produced mycoparasite Paraconiothyrium minitans have given promising results.

The sclerotia are ½-3 mm large and irregular in shape. Apothecia are rare but can be formed by the germinating sclerotia. They are about 6 mm large, orange to white with a concave or flat top and contain ascospores, with a size of 10-15 x 6 µm.

See also the closely related fungus Sclerotinia sclerotiorum which has a similar biology and can also cause lettuce drop.