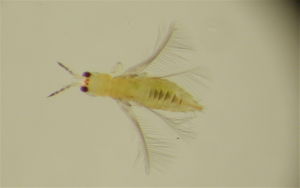 Based of DNA analysis of seven nuclear markers, S. dorsalis has been regarded as a complex of several closely related (cryptic) species. Some of these species are particularly invasive. For example, the species temporarily named "South Asia 1" and "East Asia 1" have spread to North America (Kumar et al. 2017).

Additional images of Scirtothrips dorsalis supplied by Vivek Kumar (click on an image to enlarge it):
Retrieved from "https://wiki.pestinfo.org/w/index.php?title=Scirtothrips_dorsalis&oldid=403260"
Category: