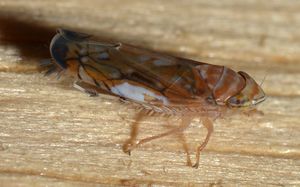 The leafhopper is native to North America and was accidentally introduced into southern Europe in the 1950s. It is an important vector of the 'flavescence dorée phytoplasma' disease of grapevine which is transmitted persistently. However, the disease is not (yet) present in all parts of Europe where the vector has been found. It feeds on grapevines only and can reach high populations, although it causes little damage on its own.

After feeding on an infected grapevine, a period of 3 weeks is required before the hopper is able to transmit the disease to healthy vines. The hopper does not pass the phytoplasma to its eggs and offspring. S. titanus is not very mobile and it is suspected that long distance spread usually involves the transport of infested plant material.

Since 'flavescence dorée' is a quarantine pest in Europe, the control of S. titanus is also obligatory if both are found in the same vineyard. The application of oil sprays or insecticides is recommended when the hoppers have reached the 3rd nymphal stage. In case of pyrethroids, several applications against nymphs are necessary.

The presence and spread of S. titanus can be monitored by yellow sticky traps. In areas where the species is present but the phytoplasma disease is absent, it is also important to monitor grapevines for disease symptoms.

Eggs are laid in the bark of vines and overwinter. They hatch in spring and development goes through 5 nymphal stages. Adult hoppers appear in the summer and there is one generation per year.